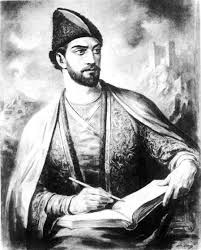 Just before the beginning of World War Il, Georgia solemnly celebrated the 750th anniversary of the appearance of the famous poem of the great Georgian poet, Shotha Rustaveli   “The Knight in the Tiger’s Skin.” Today in 2016, this poem, known to all Georgians, celebrates well over 800 years of existence and remains as beloved as ever. Who was Shota Rustaveli and what about this medieval epic poem called a masterpiece of Georgian literature makes it so relevant today?

Looking back, as the poem was celebrating its 750th birthday, during a meeting of the Association of Georgian Writers held in the capital city of Georgia, Tbilissi, a Mr. Ingorokva, Professor of Literature at the State University of Tbilissi and one of the best qualified commentators on Rustaveli at the time, spoke about the poem and its author. In the prologue to his lecture he said: “Centuries separate us from the time of Rustaveli, but his immortal poem continues to stand as the magnificent work of an accomplished genius, and its influence remains as powerful as ever. The era during which Rustaveli lived and created was the era when Georgia reached the height of her political power and cultural development. It is impossible to understand Rustaveli’s great work without a deep knowledge of the magnificent, original culture of Georgia of the 11th, 12th and 13th centuries. And, in reality, where did the universal philosophy and the humanism with which the poem is impregnated come from? The answer, of course, is that the great cultural movement known as the Renaissance began in Georgia centuries before it came to Western Europe.”

Professor Ingorokva was quite right. Rustaveli wrote a poem, which, like a mirror reflected the culture of Georgia of his day. The poem is first of all the expression, unique in form and style, of the great ideas of humanism on which as based the political and intellectual life of medieval Georgia.

Who was Rustaveli? He was one of many great nobleman who surrounded the resplendent court of Queen Thamar the Great, who reigned in Georgia from 1184 to 1213. The Lord of Rustavi in Southwest Georgia, he took the name of Rustaveli which in Georgian means “one who comes from Rustavi.” There is not the slightest doubt that he was the man who wrote the “Knight in the Tiger Skin.” In the concluding lines of his poem the author says:

A Meskhi from Rustavi.”

“Meskhi” in Georgian means a man from Meskheti, the province of Georgia where Rustavi is situated.

When did Rustaveli live and when was his poem written? To these questions as well, the poem itself gives the answer. In the prologue, the author dedicates his poem to Queen Thamar and speaks of her as his contemporary. Now, the only Queen Thamar known to Georgian history is precisely the famous Thamar the Great, who became queen in 1184 when her father, George Ill, abdicated in her favor. This and other historical facts prove that Rustaveli lived in the second half of the 12th century and the first half of the 13th, the golden Age of the Kingdom of Georgia. His poem was likely written between the years 1184 and 1207. The exact date is not known and neither are the dates of his birth and death.

After receiving a good education in Georgia, Rustaveli went to Athens (the Paris of his time) and completed his education there. He spoke several languages, he traveled extensively in Asia and Europe, he knew thoroughly the cultures, the arts, and the literature of all the civilized countries of his age. His poem is full of quotations from Socrates, Plato, Aristotle, and other philosophers, poets, and writers of classical Greece and Iran.

It can be seen that Rustaveli was well prepared to play a part in the service of his country. He received an appointment as Great Chamberlain (some sources say Chief Treasurer) to Queen Thamar the Great. The tragedy of his life begins from this moment. The queen was beautiful and Rustaveli fell desperately in love with her. All his genius is given to the task of singing her beauty, her charm, and her virtue.

“Let us sing to the great Queen Thamar, says the poet.

“1 dedicate to her my chosen odes, Odes written with tears and blood. I sing of the one of whom I have always sung.

She is all my life, even though she has no more mercy for me, than a rock.

I sing her glory in the lines which follow. ‘ ‘

Thus the poet ends the prologue to his poem.

What was his further fate? We have nothing authentic to go by, but

legend says that the poet abandoned public life, became a monk, and spent the rest of his days in one of the Georgian monasteries in Jerusalem (formerly the Georgian Monastery of the Holy Cross, the church now belongs to the Greek Orthodox Patriarchate of Jerusalem). It was there that his tomb was discovered centuries later, along with a fresco and a simple inscription “Shotha Rustaveli”. His Wikipedia Biography notes that the fresco and accompanying inscription in Georgian were defaced in 2004. But the fresco was subsequently restored.

*the poem is also referred to as “The Knight in the Panthe’s or Leopard’s Skin”.  This articledraws largely from an article written by Simon Kvitashvili and printed in the publication “The Voice of Free Georgia, vol 5, April, 1954.