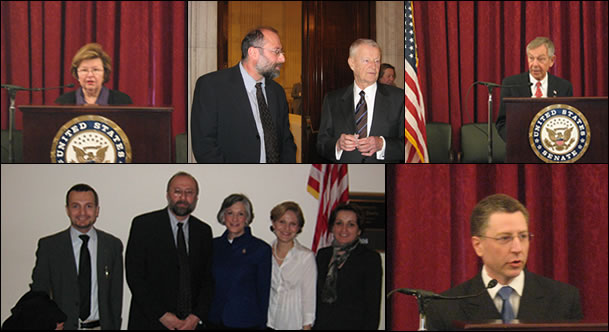 Washington, DC On Wednesday, March 25, 2009, the Central and Eastern European Coalition(CEEC), of which the Georgian Association is a member, hosted a policy reception on CapitolHill to honor the NATO enlargement of 1999 and 2004, and to support a continued open door policy.

CEEC comprises 18 national membership organizations representing more than 20 million Americans who trace their heritage to Central and East Europe. The program of Wednesday’s reception featured Senator Mikulski and Senator Voinovich, Mr.Zbigniew Brzezinski, Mr. Kurt Volker, the current U.S. Ambassador to NATO, and Mr. Michael Hatzel, a Senior Fellow at SAIS and former Senior Staff member of the Senate Foreign Relations Committee. U.S. Senators expressed their support for continued NATO open door policy, and indicated their willingness to fight for it. Mr. Volker highlighted the importance of maintaining an open door policy. In his view, NATO has become a stronger alliance by opening doors to new members. Mr. Brzezinski stated that it is in the interest of both the United States and Europe that Central and East European countries remain genuinely free. He advised countries who wish to become members of NATO one day to work toward membership in the European Union to keep this important alliance strong. Dr. Brzezinski emphasized that Ukraine and Georgia must eventually become NATO members and contribute to a collective European security, as well as benefit from this membership for their own security.

The Georgian Association hopes that NATO leaders will fully implement the 2008 Bucharest Summit decision with respect to Ukraine and Georgia, and will provide a clear road map for their eventual membership in the Alliance.