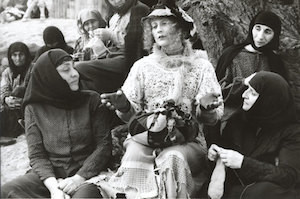 Department of Film to present the largest-ever retrospective of Georgian cinema in the United States. This passion project, undertaken by successive curatorial staffs at the two organizations over more than 20 years, brings together 45 programs in prints sourced from multiple archives throughout Europe, the U.S., and the republics of Georgia and Russia encompassing the history of Georgian film production from 1907 to 2014. The exhibition traces the development of Georgian cinema from classics of the silent era to great achievements of the early sound and Soviet era, through the flourishing 1980s and the post-Soviet period to today.

Throughout the turbulent history of the last century, Georgian cinema has been an important wellspring for national identity, a celebration of the spirit, resilience, and humor of the Georgian people. These filmmakers, working across a broad range of styles and thematic concerns, have created everything from anti-bureaucratic satires of the Soviet system, to philosophical studies rooted in a humanist tradition, to lyrical, poetic depictions of the region’s spectacular landscape.

Part I of the retrospective focuses on one of the particularities of the Georgian cinema: the remarkable lines of familial relationships that weave through and connect its cinematic production from the 1920s to the present, where we find several third-generation filmmakers active. Part II, Blue Mountains and Beyond, runs November 22 though December 21, 2014.

Film notes are adapted from research and writing by the Berkeley Art Museum and Pacific Film Archive. Film titles are listed with English translations first, followed by Georgian and, where applicable, Russian.