On May 12, 2016, the Levan Mikeladze Foundation and the Central Asia-Caucasus Institute at Johns Hopkins University School of International Studies (SAIS) co-hosted a conference “Strategic Pillars of Security for Georgia:Trans-Atlantic Integration, Economy and Democracy”. Former President of the 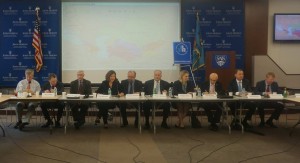 Georgian Association Mamuka Tsereteli and President of the Levan Mikeladze Foundation of the Caucasus Studies Tina Mikeladze opened the conference on behalf of the organizers. The conference brought together in two panels noted scholars, policy analysts, program implementors and representatives of the U.S. Department of State. The Georgian government was represented by the State Minister on European and Euro-Atlantic Integration Mr. David Bakradze, and Deputy Minister of Foreign Affairs David Dondua. The Georgian Embassy was represented by both Ambassador Archil Gegeshidze and Deputy Chief of Mission George Khelashvili. The Georgian representatives expressed concern about the “creeping annexation” of their country and their disappointment at the lack of movement towards a Membership Action Plan (MAP) for NATO. For their part, a number of American panelists, including Deputy Assistant Secretary of State Bridget Brink reiterated continued US support for Georgia’s Euro-Atlantic integration.

There was much discussion, particularly during a second panel moderated 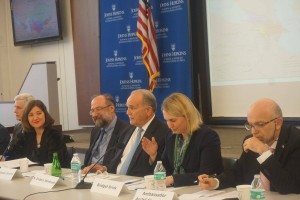 by the GA President Elisso Kvitashvili, on Georgia’s ongoing need to implement internal reforms that some panelists believed would enhance Georgia’s overall security through greater legitimacy of the government. Several panelists decried the lack of job creation, poor social service delivery, and lack of innovation in the business sector as stumbling blocks to Georgia’s economic development. There was agreement that the West needed to devote more attention on Georgia especially in her role as a hub in the developing Silk Road Transport Corridor.

The conference was followed by a reception celebrating Georgia’s upcoming Independence Day.  This year, 2016, Georgia celebrates its 25th anniversary of regaining of independence. This year’s special guest of the reception was the co-chair of the Georgia Caucus in the House of Representatives of the US Congress Congressman Gerry Connolly (D-Va) who, together with Congressman Ted Poe (R, Texas) is a co-sponsor of a draft congressional resolution supporting Georgia’s territorial integrity. Congressman Connolly received a special award from the President of the Association Elisso Kvitashvili.