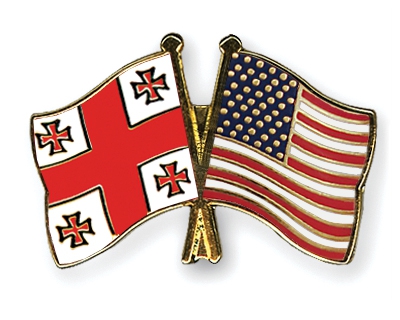 In the Georgian Association’s run up to the 100 year anniversary of Georgia’s Independence, we will spotlight interesting features of Georgian American history. Today’s piece provides a snapshot of the Georgian diaspora in the U.S.

The first Georgian diaspora organization in the United States was Kartuli Sazogadoeba (the Georgian Society) founded in San Francisco, California in 1924.  In 1930, the Caucasian Society “Alaverdi” was formed to unite different Caucasian groups, and in the 1950s it ran a children’s summer camp.  In 1931, the Kartuli sazogadoeba Amerikis sheertebul shtatebshi (the Georgian Association in the United States, or Georgian Association), which was more exclusively Georgian, was founded by, among others, Prince George Machabeli, Siko Eristavi, Paul Kvaratskhelia and Irakli Orbeliani. The Georgian Association remains fully operational today and is the only nationwide Georgian diaspora group in the US.

In the 1950s, many of the new Georgian emigrants became enthusiastic supporters of US anti-communist policies.  More politicized than their predecessors, they formed a number of leagues and parties: the Kartuli-Amerikuli liga (Georgian-American League), the Kartuli erovnuli kavshiri (Georgian National Union) and Sakartvelos damoukideblobis Amerikuli sabcho (American Council for Independent Georgia).  The Georgian-American League published a newspaper, the Voice of Free Georgia, from 1953-58. The Voice’s Board of Directors included a number of familiar Georgian names such as Tsomaia, Chatara, Tchenkeli, Dumbadze among others. The Bulletin was widely distributed to members of Congress as part of a broader anti-Soviet information campaign. The American Council for Independent Georgia published Chveni Gza (Our Path).  Many Georgians patriots living in the U.S. Included members of the GA, provided many of the details and significant information that led to the 1954 release by the House Select Committee on Communist Aggression of the document, “Communist Takeover and Occupation of Georgia”. older women with younger women

Between 1955-75, the broader and less politicized community was served by the newspaper Kartuli Azri (Georgian Opinion).  Starting in 1951, Georgians were awarded their own radio section on the Voice of America (recently celebrating its 65th year of operation) which still functions today with a small staff of dedicated Georgian journalists and broadcasters.  A biography of Petre Kvedelidze, a former VOA correspondent, is posted on our website.

Until the 1980s, the Georgian Association ran a cultural center known as the Georgian House. As noted earlier, the Georgian Association is the oldest diaspora organization In the U.S. representing the interests of the Georgian American community and its friends of which there is a growing number including former U.S. diplomats and development workers who served in Georgia, American businessmen, former Peace Corps volunteers and private citizens. . With over 1500 and growing number of Facebook friends, the organization has renewed its charitable, educational and cultural activities in the United States, focusing also on greater awareness about Georgia among American politicians, members of Congress, expert communities etc.   The Association organizes annual celebrations including for Georgian Independence Day (May 26th — it marks the Declaration of Independence of the first Georgian Republic of 1918-21). The Association also promotes and educates the public about different Congressional resolutions including House Resolutions like H.Res.660 in 2016 “Expressing the sense of the House of Representatives to support the territorial integrity of Georgia”. It is also an active member of the Central and East European Coalition of Diasporas. Several other Georgian organizations have been created since 1991 to help Georgian society through a period of extraordinary economic deprivation and chaos.  One example is the American Friends of Georgia created in 1994 and based in Massachusetts. The American Friends of Georgia is a humanitarian organization that funds a number of programs in Georgia that fight tuberculosis, supports orphanages, distributes food packages for the poor and books for libraries.  Other important Georgian-American non-profit and cultural organizations include the America-Georgian Business Council which since 1998 promotes U.S. investment to and trade with Georgia), Tvistomi in New York (humanitarian community organization), the US-Georgian Friendship Association in San-Diego. The highly acclaimed Synetic Theater in Arlington, Virginia and the New York-based Dancing Crane Company represent efforts to showcase Georgian theatre and dance.  And finally, given the growing number of Americans of Georgian Orthodox ancestry, beginning in 2011, multiple Georgian orthodox parishes began to emerge in different states including New York, New Jersey, Pennsylvania, Washington, DC, Illinois and California.