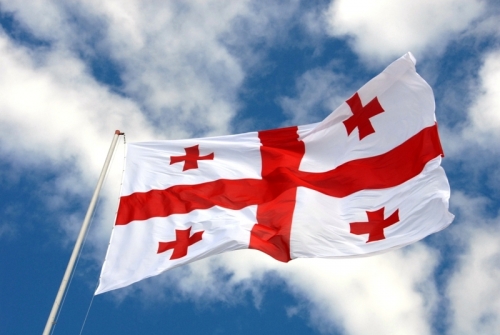 99 years ago on May 26, 1918, the independence of Georgia was restored.  After a century of foreign, Russian domination, Georgia once again took her rightful place among the free nations of the world.  The place which belonged to her for over 2000 years from the 4th century BC until 1801, the year in which Georgia was incorporated into the Russian empire.

From the very early days of her history Georgia came under the influence of the Graeco-Roman culture; she became Christian in the first quarter of the fourth century A.D. and ever since then has been an outpost of Christianity and western culture in the East. For centuries, almost uninterruptedly, she waged a battle for her independence and liberty, for her faith and culture.  Romans, Byzantines, Persians, Arabs, Mongols, and Turks, all tried to crush her. She was many times defeated, but she was never subdued. Throughout history Georgia has preserved her identity, her race, language and proud traditions. Incessantly fighting, gradually losing power, Georgia reached the modern age. She was not by then the great power she was in the 11th 12th and 13th centuries, but she was still independent and it was as a sovereign monarch, that on July 24, 1783 King Heraclius II signed a treaty of friendship with the empire of the czars. But a few years later, in 1801, the treaty was treacherously and brutally violated by Russia and Georgia was incorporated into the Russian Empire by force of arms. Although tired and powerless after centuries of efforts, Georgia did not submit, and rebellions and uprisings became a pattern of life there. In spite of oppression, in spite of intense efforts of Russification, the empire of the czars did not succeed in in its aims and Georgians still remained Georgians, never for a moment forgetting their proud heritage and only waiting for an opportune moment. This moment came with the defeat of Russia in the first World War, the Russian revolution and the breakup of the Russian empire.

On May 26, 1918, the independence of Georgia was proclaimed by the Georgian National Council consisting of representatives of all the Georgian political parties and organizations, and once again Georgians could enjoy all those rights which are the inalienable rights of man – the right to be governed by those of their own choosing, the right to speak their own language, to worship as they choose, to say and write freely whatever they wish.

During the next three years Georgia proved to the world that she was ready and able to manage her own affairs. Universal, free, truly democratic elections were held and a Parliament elected. This Parliament passed a written constitution, proclaimed absolute equality of race and sex, freedom of speech and religion; gave land to those who toiled it and passed many other laws and reforms, which proved the political maturity of the Georgian nation and of her leaders. The world recognized this fact. 27 nations, including the Supreme Allied Council consisting of Great Britain, France, Italy, Belgium and Japan extended de Jure recognition to the young Republic.

And so did Soviet Russia.  A treaty between Georgia and Russia was signed in Moscow on May 7, 1920. The Soviets recognized unconditionally the full and absolute sovereignty of Georgia and promised to have friendly, neighborly relations with her. However, only eight months later, in February 1921, without any provocation, without even a declaration of war, the Russian army began an attack on Georgia and after six weeks of bitter, unequal fighting occupied the country. Occupied, but did not subdue. The Georgian people never submitted to Soviet communism. The fight against communism began on February 11, 1921,. A nationwide, general insurrection, which broke out in August 1924. Tens of thousands of Georgian’s were executed in the years between 1921 and 1941; hundreds of thousands deported, most of them never to return. It is difficult to estimate how many more did this country of less than 4 million inhabitants loose between 1941 and 1991 when Georgia’s in dependence was restored.

This originally appeared in the May, 1954 issue of “Le Destin de la Georgie”. It was written by Merab Kvitashvili.  The Georgian Association is reprinting and updating with the permission of the author’s daughters, Elisso and Mary in honor of their late father.