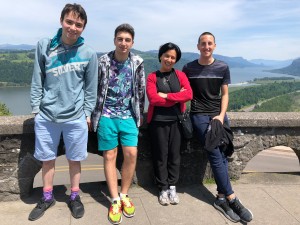 The inaugural Tbilisi-Portland Youth Entrepreneurial Exchange Program took place from May 11 to 20 in Portland and was organized by Global Youth Entrepreneurs. The goal of the program was to provide a group of enterprising high schoolers from Georgia with the opportunity to participate in a collaborative entrepreneurial project and citywide startup event, experience academic and student life at one of the top grade schools in the country, network with like-minded Oregon students, entrepreneurs, and community leaders, and tour the city and state in the spirit of exchange. The Georgian Association partially funded this initiative as part of its expanding engagement to support connections between US counterparts and Georgian entrepreneurs of all ages!

School XXI Century in Tbilisi, Global Youth Entrepreneurs’ educational partner in Georgia, sent tenth-grade students Levan Gvineria and Luka Todua on the exchange, along with English teacher Irma Kalmakhelidze as a chaperone. Eleventh-grade student Mariam Gogidze of the European School in Tbilisi completed the delegation. XXI Century selected Gvineria and Todua based on their demonstrated interest in entrepreneurship and diplomacy and excellent performance on a series of English examinations, while Global Youth Entrepreneurs invited Gogidze for her leading role in growing Tbilisi’s community of high school entrepreneurs. The Georgian Association in the USA, Georgia’s Innovation and Technology Agency, and Kargi Gogo (the Northwestern United States’ only Georgian restaurant, located in Portland, OR) generously sponsored the students’ travel to Portland, and the United States Embassy in Georgia hosted the students for an orientation prior to their visit to the United States. Seth Talyansky, who accompanied the group throughout the week, Solomon Olshin, Britton Masback, and Li Lambert of Global Youth Entrepreneurs arranged the group’s itinerary in the U.S.

In Portland, the participants were taken aback by the prevalence of homelessness, a rarity in Tbilisi. They found such cases of social isolation and neglect by fellow citizens anathema to Georgian culture. For their entrepreneurial project, the students set about designing ways to diffuse cultural traits like strong family ties and social cohesion into a society that tends to emphasize individual independence and success. The students received continuous mentorship from WorldOregon, which hosted their project work. They also visited Autodesk, eBay, and Intel, where technologists, entrepreneurs, and other company staff applauded their efforts to tackle the problem of their choice and offered feedback on ideas. Ultimately, after several days of work, Gvineria and Todua produced a resolution outlining a multi-pronged approach to combating homelessness for the city government to consider, and Gogidze devised a plan for a compassion-building game app for young children.  On the weekend of May 17 to 19, and together with around 30 peers from ten Portland-area high schools, the students took part in Startup Camp Youth Portland 2019, Global Youth Entrepreneurs’ third such event around the world. Startup Camp Youth Portland was hosted and sponsored by the Catlin Gabel School. All but a few students pitched business or non-profit ideas on Friday night, and teams coalesced around the five most popular ideas. On Saturday and most of Sunday, teams developed their concepts under the mentorship of about a dozen local business, entrepreneurship, innovation, and education experts before presenting to fellow students and distinguished guest judges on Sunday evening. The two top-performing teams—the first designing motivational programs for youth with speech impediments and the second proposing an app incentivizing carbon consciousness among those who commute by car—came away with prizes from Intel and Nike.

The Georgian Association was pleased to be able to support the Tbilisi-Portland Youth Entrepreneurial Exchange Program 2019 which represents a milestone in a burgeoning creative partnership between the youth and, ultimately, citizenries, of Portland and Tbilisi. This exchange represents Global Youth Entrepreneurs’ next logical effort, after its Startup Weekend Youth Tbilisi event last June, to foster the autonomous participation of Georgia’s young people in their country’s economy, which will promote democracy and prosperity in Georgia. Multiple appearances on television have been arranged for Gvineria, Todua, and their teacher to tell the story of their visit to Portland to a national audience. To carry this momentum forward, Global Youth Entrepreneurs plans to hold an event in Batumi next summer in partnership with a local educational institute and School XXI Century that will draw student participants from all across the country together for a weekend of immersion in entrepreneurship and diplomacy. Global Youth Entrepreneurs will also advise Gogidze on the execution of the second iteration of Startup Weekend Youth Tbilisi in June (this time not affiliated with Startup Weekend), which she is organizing at the European School together with several classmates. This program holds promise as a model of youth-led cross-cultural engagement and exchange that can be replicated between any pair of cities or countries. The government, commercial, and non-profit actors who interfaced with the students underlined the value of—and their support for—bringing in fresh cultural perspectives on local issues, especially those, like homelessness, to which many Americans have become desensitized. Gogidze, Gvineria, and Todua are eager to continue developing the projects they began in Portland, inspired by the lesson all youth involved in this program took away: organic collaboration between youth across borders is key to strengthening international understanding and ties.

The program in the participants’ words:

“Luka and I valued the experience: getting to know American teens, looking into homelessness and other traits of the city. From meeting with the companies and leaders, we realized that if you have a goal to achieve and you are doing everything to make it real, nothing is impossible. —Levan Gvineria, 10th Grade, School XXI Century, Tbilisi

“During the startup camp, I worked on problems that I’d never faced before which was a very rewarding experience for me as I had to collaborate with people of diverse cultures and ethnicities to form an understanding of those problems.” —Mariam Gogidze, 11th Grade, European School, Tbilisi