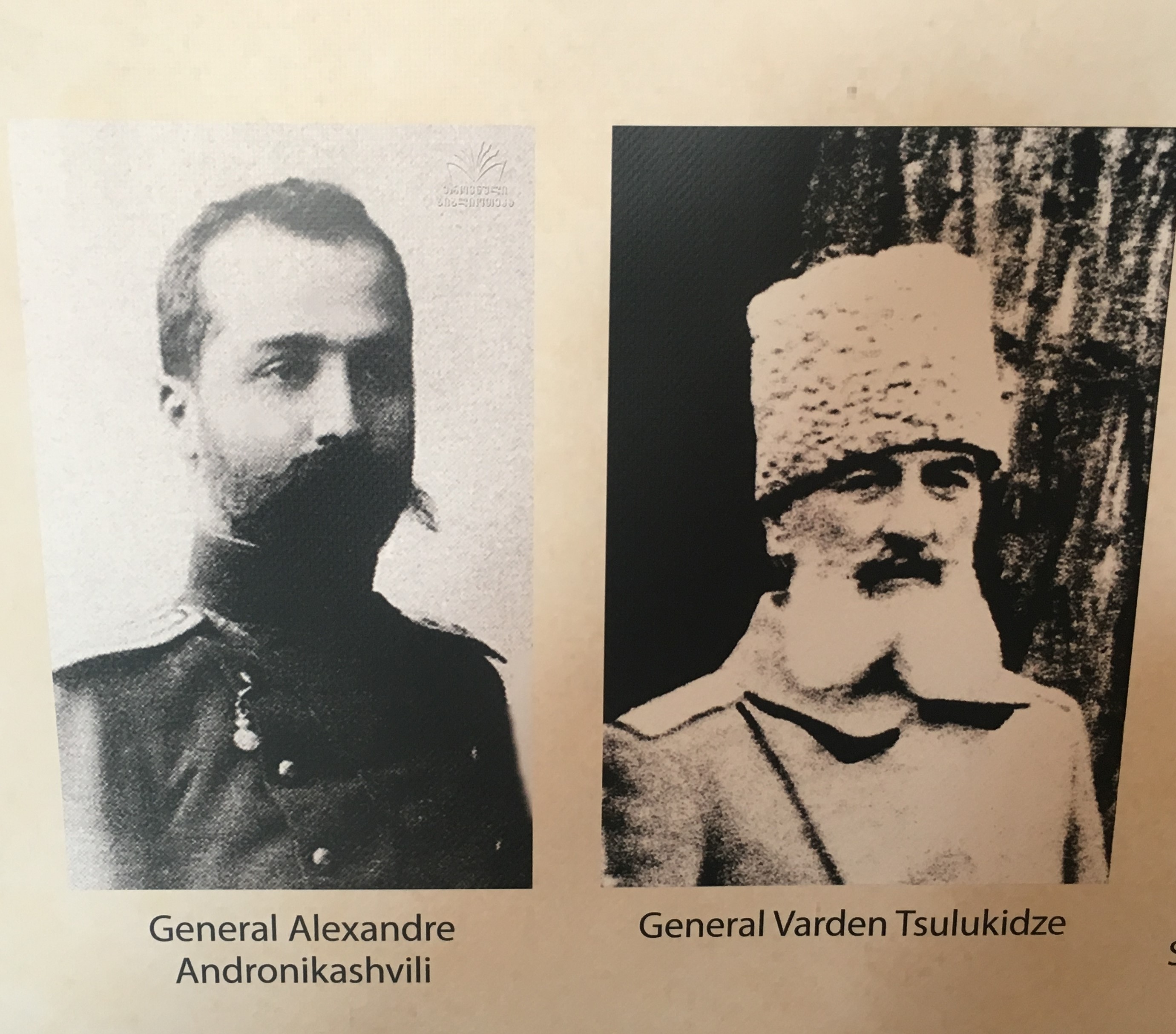 The following article is an extract from the exhibit “The Democratic Republic of Georgia – 100 years” currently on display at the Georgian National Museum in Tbilisi.

The Bolshevik occupation regime started to subdue the population by force.  Georgian clergy and the Orthodox Church found themselves outside the law.  All anti-Communist organizations were dismissed by declaring “self-liquidation”. Prohibited parties moved underground and continued to fight for Georgia’s liberation by secret conspiracy.

In 1921, anti-Soviet revolts erupted in Svanetia, Racha-Lechkhumi and Khevsureti.  Catholicos-Patriarch of Georgia Ambrosi addressed the Genoa International Conference in a memorandum and demanded the withdrawal of Russian occupation troops from Georgia.  In April 1922, the Independence Committee was formed to lead the liberation movement and its “military center” was established.  Guerrilla forces activated and spread throughout Georgia.

Khaikhosro (Kakutsa) Cholokashvili led the groups in Kakheti and Khevsureti.  The members of the squad were bound together by an oath and they were given the name “Shepiculni” (bound by oath).  In the summer of 1922, turbulence started in Khiziki, Pshavi and Khevsureti.  In March 1923, the entire military staff of the military center Generals Aleksandre Andronikashvili, Konstantine Apkhazi, Varden Tsulukidze and others were arrested and shot.  Nevertheless, in August 1924, a large uprising that was supported by Georgia’s emigrated government (in Paris) began.  To organize the revolt, Noe Khomeriki, Valiko Jugeli, Benia Chkikvishvili and others illegally returned from immigration.

Significant armed demonstrations took place in Guria, Samegrelo, Svaneti, Imereti and Kakheti.  Nevertheless, the revolt proved to be unsuccessful and resulted in massive casualties.  The government responded to protesting Georgians with mass repressions.

The National Movement weakened but did not die out completely shifting its attention to peaceful protests through expressions of culture, the arts and literature.

Several illegal organizations led by Levan Gotua, Adam Bobghiashvili, Kote Khimshiashvili and others were established in Georgia during World War II, but Soviet Special Forces destroyed all of them. The Soviets used bloodshed to restrain peaceful demonstrations in Tbilisi on March 9, 1956 and April 9, 1989.  A rare exception occurred in April 1978, when student youth demonstrations demanding that the state maintain the primacy of the Georgian language was met with compromise.

The dissident movement with representatives like Merab Kostava and Zviad Gamsakhurdia started in the 1970s. The patriotic poetry of Mukhran Machavariani, Akaki Bakradze’s critical letters and public lectures encouraged the emergence of powerful national political organizations such as the Ilia Chachavadze Society, National Independence Party, People’s Front and others.  Student activities intensified, and the role and influence of the church and Catholicos Patriarch Ilya II rose significantly.

The overall crises in the Soviet Union and the rise of the national movement gave Georgia the opportunity to restore its independent statehood again on April 9, 1991.