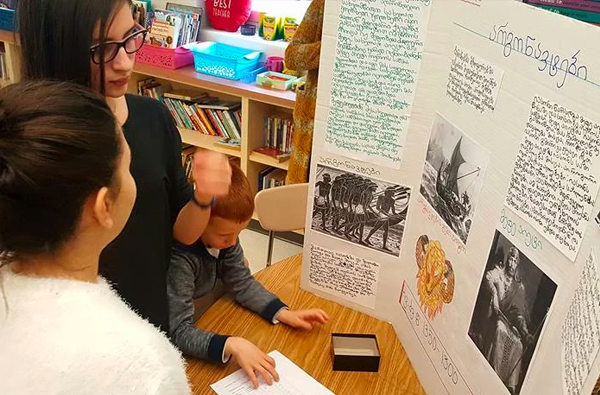 The Georgian Association in the USA is a proud supporter of the Academy of Georgian Heritage. The Academy emerged from a Sunday school project that the Georgian Association initiated in 2009-2010 together with St. Tamar’s Georgian Orthodox Church. Thanks to the efforts of the first teacher of the school, Ms. Nino Meladze, the project attracted tens of Georgian children from the Washington, DC area. Nino’s contribution was very important for building up trust for this new project.

In 2013 thanks to the energy and dedication of Ms. Tamara Kalandiya, the project evolved to the next level and the Academy of Georgian Heritage was formed as an independent 501 C (3) organization. Tamara is a Georgian-American from Abkhazia and mother of three. She spends significant time and effort to make this new organization a success. The academy, based in Maryland, currently educates up to fifty Georgian-American children in Georgian language, history, literature, art, panduri, dance, and physical theater by Synetic.

The Georgian Association initially provided limited financial support to the Academy, using funds from a trust inherited from Martha Alshibaya and her husband Stanley Garstka, an American family of Georgian-Polish descent.  More recently, the Association is providing support from a scholarship fund endowed by the Chatara family of Illinois.

The School of Georgian Heritage of the Georgian Heritage Foundation in Santa Clara, CA (https://www.facebook.com/GeorgianHeritageFoundation) was founded in August 2020. The goal of the organization is to promote, preserve and popularize Georgian Heritage among the Bay Area’s Georgian community and friends of Georgia. The school currently conducts online classes free of charge for over 40 students concentrating on teaching the Georgian language. The donation was made possible by a scholarship fund managed by the Georgian Association in the US.